November 25, 2014; In BANMOO showroom, Shanghai; Invited by Cultural and Education Section of the British Consulate-General; Will be broadcasted one month later. 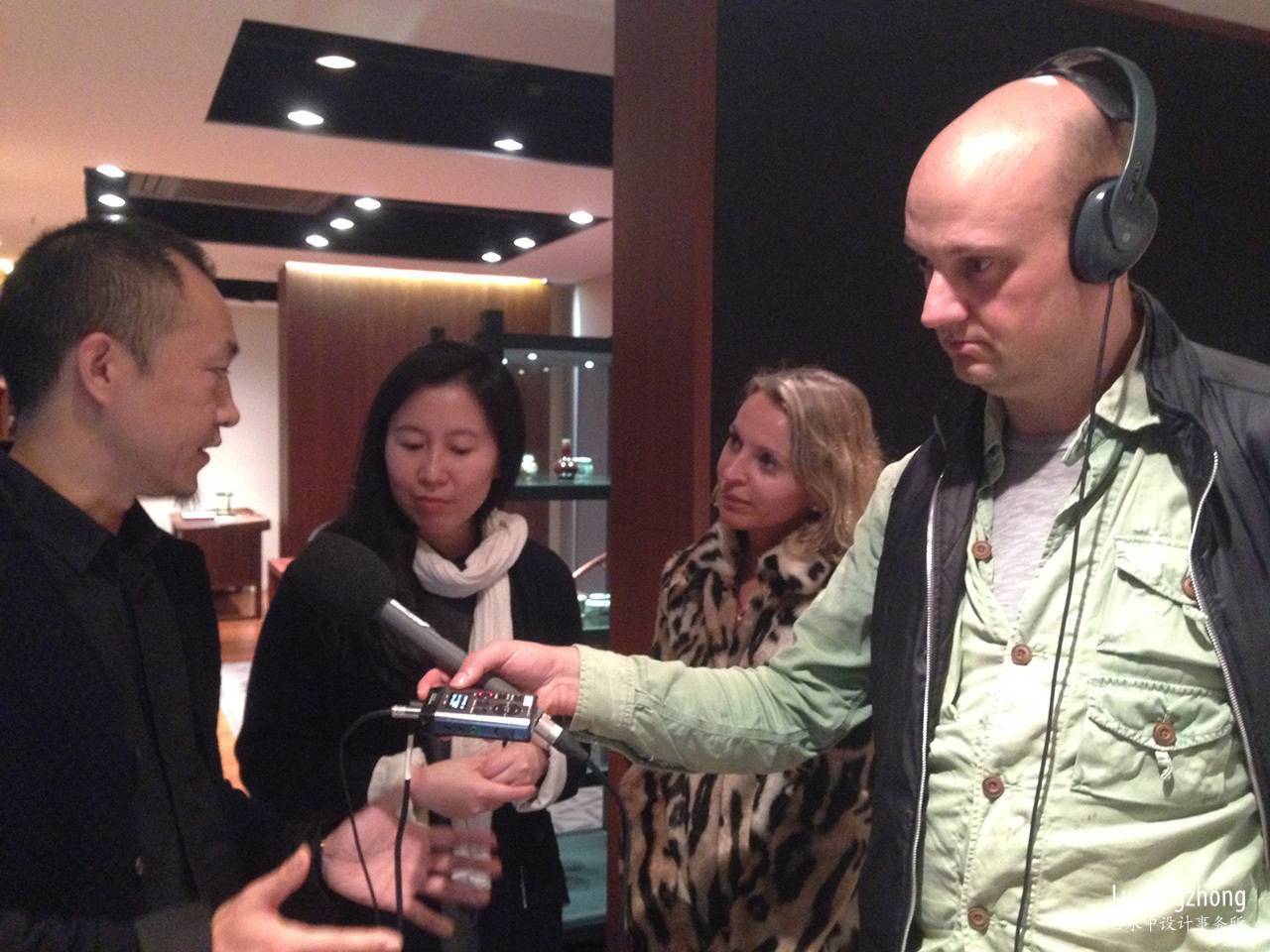 Female MC: Many of us in our homes will have items made in China, but how many of us will have something designed in China? I am in a really high-end designer furniture showroom, the name of the brand is BANMOO, and I am with the designer and owner now.  First of all, I just want to know how you design, where do your ideas come from?

From ancient to modern China, I think there is a need to connect with the past that we used to have, with the atmosphere, and the people and the crafts that we once enjoyed.

MC: So how does that manifest in your work that is so very specific to Chinese designs, whether it is a vase or a carving. And at the same time it almost has got a Scandinavian furniture simplicity to it.  These two silver grey, very beautiful bolster pillows.  They have got very simple lines, yet somehow it is very Chinese.  How did you find this idea?  Where is it from?

This piece of furniture is called TA in ancient Chinese furniture.  In ancient China, it used to be a very important piece you use at very important, high-level reception occasions. It is very low, almost horizon-like. And as you can see, it is flat and wide. Another very important point is what you just mentioned, its curve. The curved shape resembles a person’s waist.  It is all the way up, and plays an important role in forming the QI of this whole piece.

MC: And when you talk about QI, for people who don’t know what it is, could you just explain that?

QI is like the traditional Chinese calligraphy.  There is a saying in Chinese calligraphy, “the QI connects even though the pieces are fragmented”.  A square is not simply a square, but one filled with energy, so its lines expand, almost making the square rising up in the air.  The bottom part is empty, as if connected by the QI.  All curves connect, so that you feel the QI, or momentum, there.  The QI flows freely, and creates an atmosphere.

MC: The QI is life force.

My inspirations come from traditional Chinese painting and especially calligraphy.  In all my furniture works you could see the lines flowing, the dimensions, the scales.

MC: Does he feel today that more and more Chinese designers are trying to preserve more of that past, in a modern way?

Male Voice: I think it is not the designers, it is the people who want to have such stuff at their homes. It must have been difficult, how long has the business been going?

Male Voice：How is it now? (After some discussions about what questions are to be raised)

Female MC: What are people buying when they buy your furniture? What concept are they buying? （In China in recent years, there are people who gradually get really interested in traditional Chinese arts, culture and ideas.  It is like myself.  When I was a student I studied the Bauhaus designs, but in the last ten years I got really interested in Chinese ideas and designs.  So I think my customers and I belong to the same group, if I like an idea, they like the idea.

Female MC: You have only been here for eight years, what do you think has changed in the Chinese consciousness that they no longer want to buy imported Western designs in terms of artifacts and furniture pieces in their homes?

It has been thirty years since China opened up to the world. In these thirty years people had a lot of access to the Western world.  But gradually there came the question of identity, who you are, where are you from, where are you going. People find that there is difference in the preference of artifacts and lifestyles.  This difference breeds thinking.  People become aware of the difference, then they become willing to find a turning point.

Male Voice: I think it is an interesting idea of identity, I mean that’s a wonderful way describing it.  I am not sure, but there is something interesting about identity.

Female MC: There is a new identity.

Male Voice: What is this identity that is emerging?  It is a process (After some discussions about what questions are to be raised)

Female MC: So what is the new identity that is emerging?

It is a member of a group of people who are going through the transformation, in China, contemporary China, not ancient China, not a Western country. There is something important shared by this group of people. They want to share something that they once lost, such as the appreciation of arts, the love of nature. Some people may find our designs more quiet, as it makes up for the busy lifestyle of modern-day people.

Different from traditional Chinese furniture pieces, mine has integrated considerations on human engineering, and simplistic designs. A lot of times the traditional Chinese furniture pieces were designed according to Confucian rules。I believe our modern society is an open society, where we not only need rules to speak for our cultures, but also care for the people, for the human body. Other elements, such as the simplistic lines, the scale, the dimensions, the touch, those are what I love especially, which had also been the love of ancient Chinese people before the Ming Dynasty.

Female MC: That you like to have that part of tactile design as well. People want to touch things and feel things, not only see them and feel underneath them, but to the fingers too.

In this city that evolves so fast, we are used to use our eyes to observe things, to see things.  We almost forget that we can also touch things and know them with our hands. When you touch at an object, and the environment surrounding you, you become part of it.

Female MC: It is somehow idealistic, isn’t it, for somebody like you, a designer, who wants to have a balance between Confucian rules, old Chinese ways of doing things, and more humanistic ways, to do that, I see that as idealistic, do you?

I think that is a very important aspect of my design, because by using our furniture I want to deliver two things to this group of modern people: first, an energy for their body and mind. I want to give energy to this group of people, because I think for the last thirty years, against the backdrop of modern-day China, it is meaningful to do so.  Many people have got their energy bruised or lost, so first I wish to help them restore the energy, and secondly I wish to send them off on their road again.

By modern-day China, I meant for the last hundred years, especially the last thirty years, during which cities have been expanding in a very fast way.  During this process, the energy of this group of people got lost, such as about culture and resources. Like me, they feel the anxiety for the future, for the present moment. Through the utensils we use, the furniture, as well as the environment, we could help restore part of this energy ,this energy for the body and for the soul.

Female MC: So he is healing.

And the healing is not only about healing the wound, but about getting ready for the future and get on the road again.